“Angel of Light” by ForeverFallen16 on DeviantArt

AngelicView: This wonderful NDE was posted to NDERF today and I think you’ll enjoy it. First of all, I love what her deceased mother-in-law tells her when she expresses that she was sorry she didn’t get to meet her grandchildren. Second, learn a bit about what her job was in the world she came from before coming to planet Earth. And finally, learn what her mission is – and I think many of us are on similar missions.

Thank you so much Anna, for sharing your NDE 🙂

The gush of blood that all of a sudden turned into an endless river, as far as my perception was concerned, soon turned into a sudden process of feeling very very cold, I felt I was freezing, as if life itself was leaving me. I was shivering uncontrollably on a surgical bed and the very dedicated doctors and nurses were trying their best to cover me with blankets, to keep talking to me. My doctor had left after a long lasting difficult labor. She’d seen my son born 4,600gr, 56cm tall, she’d seen me smile and feed him and she’d left the staff with instructions to check and see whether I’d be fine, considering there was no usual bleeding during the labor, just the placenta and the baby.

I heard them calling her and asking her to return. I had squeezed my eyes to the point of utter pain from the “freezing” that had overtaken every single limb, which I was sensing in such detail during those minutes. All of a sudden, I could only think of God and felt an urge to go, to let go and slightly opening my eyes, last thing I whispered to the nurse while grabbing her medallion of a cross hanging from her neck onto my chest, “Do you believe in God?”… She was engaged in saving me, but that second, she turned to me, removed the necklace and placed it inside my hand. And that’s when I started floating.

I barely glanced at the over packed surgery room, emergency bells were ringing for my doctor to rush in, I saw her looking at my body and talking to her/it as I was hovering above, happy, healthy, excited. before I knew it, I got pulled, as if by a vacuum cleaner, into this wonderful pool of light…

Till today, that pool is the most beautiful, most perfect thing (for the sheer luck of the truly matching word, I can’t describe it as anything else but “thing”) I’ve ever experienced. Yet, the one word I’d address to the entire experience/journey, would be “REALITY”. THAT pool, THAT place, THAT event was D most REAL thing that’s ever happened to me. On that background, the life I’d been living on planet Earth was an insignificant second of an experiment, which I’d volunteered for. The ME, the I wasn’t Anna the lady who’d just given birth, but it was a light being – “LIGHT” in every sense. i was made of the same light as the one the pool was filled with. It sensed everything, felt everything beautiful as there can ever be, thought and understood everything and was floating around inside the pool happily, FINALLY back HOME!!

“I was aware of being a Light Being and that my human body was merely a vehicle, a skin I could drop off and float away.” ~Anna

And, “LIGHT” as in lightness, no gravity, no strings attached (that’s how I sensed at the time), I was sooo happy that I wouldn’t have to sleep, or eat anymore, no tiredness, no negativity, no anxieties whatsoever, and you float and float lightly, dancing and singing with no audiovisuals, you’re just BEING, that’s what you’re for – TO BE! I did have a brusque memory of my husband and children, of our house and friends and relatives, but I absolutely KNEW (don’t know how, but I sensed perfectly well that I simply KNEW) that they’ll be perfectly well whether I’m with them or not.

“Religious institutions have no role. No form of control has any role. What we seek is within us.” ~Anna

Next, supported by light pool waves (so gentle and caressing, felt like a mother’s touch, a mother’s love), I floated onward into a space that was endless and was neither too bright, nor too dark, it was a place, though, without limits. Then I saw seven and some more sheds of lights/light beings moving towards me… We didn’t have speech. We 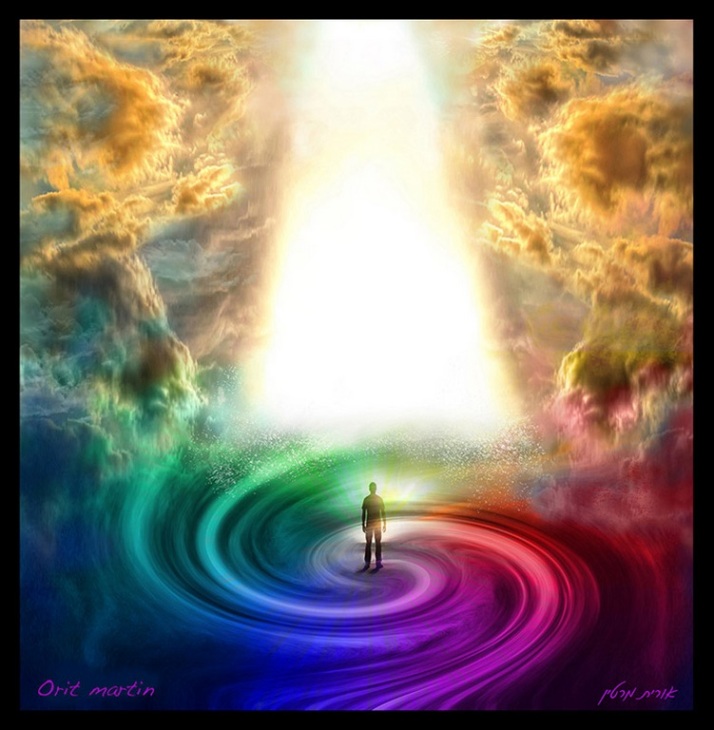 conversed, yet not a single vocal word was uttered. The very central one was my deceased mother in law who told me they’d be keeping me a company for I was to return in a while. And her thought came into my being and I could feel and see things through her mind and sense exactly how she meant it. I “told” her – “I would so love for you to be with us and play with your grandchildren”. She “answered” – “Don’t you worry at all! Before this child was born, we went together to all the gardens and lovely forests and we laughed and played and sang together. Besides, now that I’m here I can protect you much much stronger than if I were there, weak and ill”…

My aunt, my father in law, my grandmothers were all there, yet the remaining ones weren’t relatives I’d known from earth, they were light beings I’ve known before being born into the Earth. They guided me to a “library”… I place this word inside quotation marks because it was a multidimensional composition (I cannot even call it a structure). Apparently, I had a “job” up there and had left it “briefly” when coming to Earth because I’d needed to experience certain things and learn certain things in order to be able to continue my work… There were scale and stairs like features which we could move by the will of our minds. And, BTW, everything I’d learned – languages, subjects, nature observations – while being on Earth, was absolutely useful up there. I’d then floated onto my unfinished manuscript which looked like some form of tablet except it would only appear by my mind’s command… It had data from way before but since I “already knew” it, I didn’t even “look back”, i simply “stared” at it and out of where my forehead is placed now that I’m human again, appeared these strange characters/letters, round and perfect, a language I’d known seemingly eternally, and by sheer thinking of these thoughts, these characters stamped themselves onto the “manuscript”… I cannot call these characters “language” as we know it. One doesn’t need to speak it or write it. It’s simply a thought process.

However, these thoughts I’d filled into the manuscript I was in charge of had a great purpose, served a great purpose, which as a Light Being I knew, however, back into my human body, I don’t have a clue, as if there was a veil administered upon my return. There were many other light being conducting similar work, and yet I knew that not every soul or light being is given such a task. Ours was a team destined to do this… Others were destined for other “work”…

Time and space had no physicality, no validity. I’d call the whole thing as FREEDOM, the PERFECT FREEDOM, which every person I know aspires to, fights for, dreams of etc…

“Instead of walking, I wanted to float. I didn’t want to eat or sleep. I seriously had to readjust to the earthly life.” ~Anna

The one thing I understood was that Aramaic and Armenian heritages hadn’t happened to me just this one Earth lifetime, but several other times as well, as if I was in charge of moving this lineage of light beings. However, no notions of nationality, or races or gender, or political choices, or kings, or cultures held valid up there… Everything was filled with love and knowledge…

And then, I raised my head off of the “library” as if by someone’s gentle calling of my name… someone was telling me “Anna, need for you to go back”… That moment I felt earth-like sadness, which hurt piercingly what I’d been in that duration – that Light Being… And I found myself far from the pool and the library, but looking at the Planet earth from the space/cosmos, and a light being’s hand risen next to me pointing at the Planet, and a voice asking me “Look there (the planet)! What do you see?”, I said “I see Planet earth and I don’t want to go back. This is my home, why are you sending me back there?”. He soothingly calmed me (all sensory, no touches, no words), then asked again (oh, with such divine voice, an actual, physical voice), “Look again….. What do you see NOW?”.. Suddenly I saw what the voice saw – “I see our planet and there are no borders dividing countries… The borders are gone!!”… He said “This is why you’re going back. You have a mission.”… And that’s how I came back.

“There will be no borders dividing nations…” ~Anna

Had a very difficult time afterwards, trying to adjust. Was an avid reader before, but became even more hungry for knowledge, absorbing lots of information the entire time. i became more conscious of the environment, of clean air, clean water, world hunger, wars and poverty. I grew such levels of empathy that at times it’s hard not to feel the pain of another human being.

I kept talking to representatives of various religions and they hadn’t much to say. The closest to explaining things I saw them, perhaps, were some parts from the Vedas (most parts, actually).

I’ve been having out of body experiences, sudden, usually at night, more frequent and intense than ever before. I do have certain extrasensory moments however avoid working on them, or rather do not wish to get to deep into them. I do, however, at times get nostalgic trying to figure out what “the mission” was. But overall, it was the best thing I’ve ever ever experienced in my life (here)…