AngelicView: I think this is big – coming from Dr. Michio Kaku – on the subject of the giant “alien” (I use that term loosely) megastructure found in space between the Kepler Telescope and a star. He says that there are great light fluctuations in this star, as if something massive is passing in front of the star. If it was a planet, he says that there would be a maximum of a 1% light fluctuation. But in this case the star light has been dropping 22%. Kaku says there is a colossal, humongous object of some kind blocking the star light.

He says that since it was first observed in 2009, they have ruled out everything else, and are left with the speculation of it being an alien mega structure.

See the video, below.

END_OF_DOCUMENT_TOKEN_TO_BE_REPLACED

AngelicView: Some of us were discussing this subject online, and I thought it was so interesting that I thought I’d share it here – with you. 🙂

You might have seen the headline, “Russian Astronauts See Angels In Space”, plastered around the internet in various places such as Alternative News sites, Forums, and blogs. It was unclear to us who were discussing it where the story came from. Did they really see some kind of gigantic, light-emanating, winged creatures or beings in space? Or was it just a sensationalist article?

To make a long story short, after some searching around I was able to find (what I think was) the original source of the story. It was a Russian News page. Looking around at that Russian News site, I wanted to see if it looked like the other stories at that site were sensationalist-type stories and what I found was that it appeared to be a straight-forward site with news, politics, and the like.

So while I can’t guarantee anyone that the Cosmonauts saw the strange beings – I can tell you that it looks more possible than not. In addition, there is a lot more to this article than just that piece of the story! I will reproduce the story just as it appears in Pravda.ru just below ⇓

END_OF_DOCUMENT_TOKEN_TO_BE_REPLACED 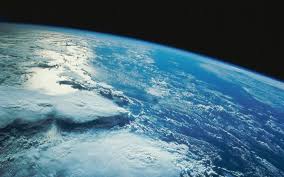 Thanks to Jolene at From Quarks to Quasars

Even if you haven’t heard this myth, I’m sure you’ve often wondered what the Earth looks like from a distance. If neither of these things is true….well then, you should probably get out more.

When asked what features are visible from the Moon, Apollo 12 astronaut Alan Bean stated, “The only thing you can see from the Moon is a beautiful sphere, mostly white, some blue and patches of yellow, and every once in a while some green vegetation. No man-made object is visible at this scale.”

END_OF_DOCUMENT_TOKEN_TO_BE_REPLACED

“From this distant vantage point, the Earth might not seem of any particular interest. But for us, it’s different. Consider again that dot. That’s here. That’s home. That’s us. On it everyone you love, everyone you know, everyone you ever heard of, every human being who ever was, lived out their lives. The aggregate of our joy and suffering, thousands of confident religions, ideologies, and economic doctrines, every hunter and forager, every hero and coward, every creator and destroyer of civilization, every king and peasant, every young couple in love, every mother and father, hopeful child, inventor and explorer, every teacher of morals, every corrupt politician, every “superstar,” every “supreme leader,” every saint and sinner in the history of our species lived there – on a mote of dust suspended in a sunbeam.