It is said that once Buddha achieved enlightenment he placed a victory banner on the summit of Mt. Meru, symbolizing his victory over the entire universe. Again, Mount Meru here is believed to be the central axis supporting the world.

1). The Mara of Emotional Defilement

It was only after conquering these four negative traits that Buddha could proclaim victory over ignorance, and achieve nirvana.
Here, it is worth a brief diversion to note that in calling Jesus ‘the Way’ the early Christians were following in the footsteps of the Buddhists. Just as converts to Christianity living long after the fact altered the images of Jesus, a similar artistic make-
over was applied to Buddha. Early Buddhist art consisted of symbolic representations of Buddha.

It was customary to represent the Buddha as a pair of footprints indicating the way to walk to enlightenment, or as an 8-spoked wheel, the symbol for the Wheel of Truth, the Anunnaki symbol of king ship.

The Dharma Wheel symbol of

the 8-fold Path of Buddha or the Universal Law.

Wherever archaeologists discovered remains of the early Sumerian civilizations the symbol of the “the Gate of the Gods” was prominently displayed. The Sumerian god Enki became Poseidon in the story of Atlantis.

The Sumerians depicted this gate as an eight-pointed star. This star-sign denoted such terms as an, the ‘Lord Anu’; dingir, the ‘Bright One’; an, ‘high’; and ana, or an, ‘heaven’. It was often found as a determinant in front of the names of the Shining Ones.

Sitchin assigns the Babylonian version of the symbol of the Cross of Light to Enki’s home world the Nibiru, which means ‘crossing place’ or ‘gate’.

The particle accelerator of Atlantis

Relaxing after a presentation on this subject in Florida a few years ago, a scientist approached me. He told me he was asleep through most of my presentation… until I “putup that blueprint.”

“Blueprint? What blueprint?” I asked.

He fished through my slides until he came to a 2nd century drawing of the Meru pillar or tower. In my talk I had presented it as an example of a possible ‘Grailtuner’ and a candidate for the rod shown in Jesus’ hand in early Christian art. (For more please see my article Jesus, FDR and the Meru Superantenna.)

“That blueprint,” he responded.

Studying the drawing, the scientist told me that he designed particle beam weapons for a living. Laser cannons. Light sabers.

“Your Meru drawing is a blueprint for a particle accelerator and a particle beam weapon,” he said knowingly.

Squeezing his thumb and forefinger together to mimic a pincer, he said the weapon is designed to rotate on the circular platform. The ‘horns’modulate the pulse emanating from the weapon.

Late in 2004 digital artist Jack Andrews rendered the Meru drawing in 3-D on a computer.

Presented here is a comparison of the base of the Meru drawing with a plan for a cyclotron, a particle accelerator designed by Ernest O. Livermore in 1929 and developed in the early 1930s (coincident with America’s shift to a technologically based society).

The cyclotron was a necessary technology used in the splitting of the atom and the development of the A-bomb.

Glancing at the drawings it is easy to see why the scientist saw a similarity between the two designs. The question is:

What in the world is a blueprint for a particle accelerator doing in a 2nd century Chinese manuscript?!

One can see that the Meru drawing is an axis that resembles an antenna (or a microwave weapon from Star Wars). There’s a reason for this. One well-known scholar of Buddhism quoted by Victoria LePage, Lama Anagarika Govinda, says Meru is,

“the seat of cosmic powers, the axis which connects the earth with the universe, the super-antenna for the inflow and out flow of the spiritual energies of our planet.”

This astonishing drawing was among the famed Dunhuang Manuscripts discovered in the secret repository the Cave of the Thousand Buddhas early in the 20th century by Hungarian-born explorer Marc Aurel Stein. According to the Order of Nazorean Essenes (Essenes.net), numerous 3rd century Manichaean-Christian manuscripts were part of the Dunhuang ‘hall of records’.

Historians claim monks in hidden monasteries in Central Asia trained Issa (“Jesus”) during his 18 ‘missing’ silent years between 12 and 30. He traveled the mountain passes and taught widely in the monasteries and markets.
On the next page, we see a comparison of apex of the Meru pillar with the cone featured in a scene etched onto a golden plate and presented to King Tutankhamun. 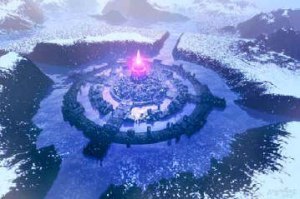 Author Z. Sitchin proposes this an Anunnaki space craft on a silo.

My working hypothesis is that this diagram, schematic or blueprint is a mandala whose symbols point to the function of the actual thing… an instrument of some kind capable of conducting the spiritual energies of the planet.

Mandalas are “read” or memorized for visualization during meditation. They are blueprints of the three-dimensional palace of the deity. The purpose of the mandala is two-fold: to acquaint the student with the symbols of the deity (i.e. Buddha, Christ) and to allow the student to “enter into the mandala”; that is, to enter the frequency or vibration in which the deity lives, i.e. ‘Meru’.

This is how the mystics of Shambhala were raised from a man to a god-man. They mastered the Meru symbolism. This raised the vibration of their mind and body and he entered the mysterious realm of Shambhala.

In the diagram of the base of the Meru pillar we notice it has four sides. The arrangement of the Central (or Whirling) Mountain surrounded by four subsidiary peaks is found in the Navajo sand painted mandalas also corresponds to that of Mt. Meru, flanked by its Four Guardians and their corresponding four subsidiary mountain peaks. In India, as with the Navajos, the Four Guardians are also represented as either gods (Lokapalas), mountains, snakes (Nagas) or birds (Garudas), which are frequent animal shapes assumed by them.

Moreover, each of the Four Hindu Guardians is also associated with a heraldic color, in exact correspondence to the Navajo ones: White, Yellow, Black and Red. These, of course, are the four races of humanity, which originated in Eden or Atlantis, according to legend.

The Four Guardians are sometimes represented by the Four Trees or by Winds, Suns, Moons, Archangels, Bats (Vampires), Thunderbolts, as well as by Coiled or by Standing Serpents resembling zigzag lightning and ball lightning.

According to a conversation I had with a Tibetan White Sand Mandala designer, the concentric rings at the base of the Meru pillar represent water. This is confirmed by Philip Rawson in his book The Art of Tantra in which he presents a painting (above right) of Rose-apple land. I am most intrigued by this place name ‘Rose-apple land’. When we apply this place name to the perceived function of the Meru antenna or accelerator, it suggests that it created a force field.

A particle accelerator is an electrical device that generates charged particles, such as electrons, protons and ions, at high energy. So-called “nuclear accelerators” are used to split the atom for scientific research, but most particle accelerators are built for more practical applications. They are used to manufacture a myriad of products including semiconductors. They are also used as X-ray machines for cancer treatment and for detecting weaknesses in materials.

One of the early particle accelerators responsible for development of the atomic bomb.

Built in 1937 by Philips of Eindhoven it currently resides

in the National Science Museum in London, England.

The Large Hadron Collider (LHC) is being built at CERN, the European laboratory for nuclear research. Costing $3 billion and expected to be completed in 2007, it will be the largest particle accelerator in the world for nuclear research. While making 17-mile rings at nearly the speed of light, protons will be made to collide into other particles 10million times per second.

The main purpose is to find the Higgs boson, considered by some scientists to be the fundamental element of matter and often called the “God Particle.”

In addition, physicists hope to use the collider to answer the following questions:

As of June, 2005 no experiment has definitively detected the existence of the Higgs bosons. (AngelicView: Until recently, they claimed to have found it.) The search for the hypothetical elementary ‘God Particle’ is reminiscent of ancient metaphysics. According to the Zohar, manna, the food of the gods, is made (detected/produced) by a Manna machine strikingly reminiscent of the Merupillar/particle accelerator. It starts its journey as dew and falls to the ‘field of holy apples’.

The people who preserved these secrets called themselves the Reapers of the Holy Field. The fact that manna was called ‘blessing’ or ‘mercy’ (meru-cy) tell us the ‘holy field’ is a beneficial vibration. The reapers are the ones who know how to harvest the (blue) apples from this field. They use particle accelerators. (Later, we will compare the human body with these devises.)

It is CERN’s search for extra dimensions that is most intriguing to us. What will they find?

In addition, in the next few decades, the possibility of black hole production at the highest energy accelerators may arise, if certain predictions of superstring theory are accurate (Scientific American, May 2005). A black hole is an area of space-time with a gravitational field so intense that its escape velocity is equal to or exceeds the speed of light.

As we can see from the comparison of the spinning black hole presented here there is a striking similarity with the symbol of Atlantis.

I’ll leave you to contemplate the similarity.

whose shape is distorted and not spherical.